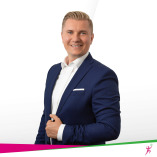 4.83 out of 5
Excellent
140 Reviews
of which
62 Reviews
from 1 other source
Authenticity of reviews
Contact information
Mr. Viktor Klassen - owner of Klassen Finanzierung - has been working as a professional financing broker in the region since 2009. In addition to a variety of education and training, Mr. Klassen was able to further build and expand a broad... expertise and personal network. Since February 2013, Mr. Klassen and his service company "Klassen Finanzierung" have been based in the new business premises at Schillerstraße 2, 88326 Aulendorf. In the heart of the old town of Aulendorf, the parents and Viktor Klassen with your team operate a real estate store and financing advice.
With our new slogan "I am faster" tireless commitment, professional advice and reliability are the credo in the house Klassen.
Convince yourself and look spontaneously in the store or call us directly. 07525-8412 or Viktor Klassen directly 0151 - 27004203

4.92 out of 5
12 Reviews
Klassen Finanzierung offers a professional service.

4.93 out of 5
Excellent
5.00 out of 5
Excellent
Recommendation
Hello
I am a customer of class financing
I was very pleased with Mr. Eduard Philipp is simply to recommend, he had me very much helped and supported until I have the loans, was always there for me no matter what questions had he answered friendly he was my great helper.
Thank you for your hard work

Thank you Viktor, we will definitely come back to you and your team for any upcoming financing.

Comment from Klassen Finanzierung:
Thanks for the review :-)
Send email to reviewer  |  Report review
Share review:
5.00 out of 5
Excellent
Recommendation
Mr. Klassen has taken care of the financing of our customers / prospective buyers within the shortest time and mastered with flying colors! Fast and competent handling. We look forward to further good cooperation!

Show original Translation
Quality 5.00
Value 5.00
Implementation 5.00
Consulting 5.00
Services 5.00
Customer service
Excellent (5.00)
Cost-performance ratio
Excellent (5.00)
Customer review & rating for:
Beratung
View rating
01/04/2019ReWa Immobilien G.
Send email to reviewer  |  Report review
Share review:
4.85 out of 5
Excellent
Recommendation
I was able to realize my apartment purchase with Mr. Klassen in a timely manner and despite a not so high deductible.
Everything (really everything) went smoothly and my concerns I had, could always be cleared directly aside.
Super accessibility be it by email, phone or WhatsApp.
Thank you very much!!!

Comment from Klassen Finanzierung:
Thanks for the great review 😊
Send email to reviewer  |  Report review
Share review:
5.00 out of 5
Excellent
Recommendation
We came to Mr. Klassen via the testimonials from this site. Since these are consistently positive, we contacted him after a short consideration.
The appointments always took place in our apartment. Mr. Klassen left a great serious impression from the beginning. He took a lot of time for us and presented us with various offers for the financing of our house, according to our wishes.He always responded to our questions objectively and patiently and was ultimately able to remove our doubts about the feasibility of financing. (Other banks refused us, although we are two full-income earners who also have no debts. And this as a civil servant and employee with over 20 years in the same company).
He even went through the entire contract point by point. If we had questions, we could write Mr. Klassen at any time by Whatsapp. Even if something else was needed from us, the documents could be exchanged quickly and easily.
In our case in particular, a change in the start of construction had to be included at short notice, which was quickly and reliably taken into account by Mr. Klassen after consultation with the bank. THANK YOU AGAIN. Mr. Klassen is a man of the trade and understands his craft, we therefore recommend him 100 percent and would finance again with him. He also promised to be there for us until the last payment from the bank. In my opinion, that is not a matter of course.

Comment from Klassen Finanzierung:
Thank you very much for your great review. I am very happy to be here for you.
Send email to reviewer  |  Report review
Share review:
5.00 out of 5
Excellent
Recommendation
Mr. Klassen was always there for us and did not shy away from appointments outside normal business hours.
We would definitely recommend Mr. Klassen to others because he is not tied to a product and can therefore make the best offer for the customer.
We really liked his open and sympathetic manner.
Even with every problem he kept a cool head and always solved them as quickly as possible.
At this point we would like to thank Mr. Klassen again for everything he has done for us and made possible.
Show original Translation
Quality 5.00
Value 5.00
Implementation 5.00
Consulting 5.00
Services 5.00
Customer service
Excellent (5.00)
Cost-performance ratio
Excellent (5.00)
Customer review & rating for:
Beratung
View rating
03/12/2018Andreas und J.

Comment from Klassen Finanzierung:
Thank you very much for the kind words and the great review. I am always happy to be there for you.
Send email to reviewer  |  Report review
Share review:
1 2 3 4

62 Reviews from 1 other source

Your message to Klassen Finanzierung

All reviews and experiences about Klassen Finanzierung are the subjective opinions of those who compose and submit them  |  The profile owner is responsible for the contents of this page  |   Profile active since 16/03/2016  |  Last update: 27/04/2022   |  Report profile