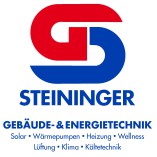 4.51 out of 5
Excellent
64 Reviews
of which
38 Reviews
from 2 other sources
Authenticity of reviews
Submit a review
Contact information
Installer for new construction, reconstruction and renovation in the Mühlviertel and around Linz.
We are - for over 50 years - specialized in the installation of single and multi-family homes. From the dripping water tap to the highly efficient heat pump system - your reliable partner.
View full description

First we had a great consultation by Mr. Steininger Jun. He came to us, measured everything, advised us which device would be good and then made an offer. We accepted it, Mr. Steininger contacted us again because he could offer a better, but cheaper device with the latest environmental guidelines.

The delivery date was met to the minutes, two very friendly employees have mounted the devices, then came the air conditioning technician. He worked very precisely, mounted everything neatly and afterwards he put everything away and vacuumed it up again very cleanly with the vacuum cleaner he had brought with him. It was cleaner than before, but I don't tell my wife that. The air conditioning was explained point by point and the first night in the cool bedroom was already a dream.

The company Steininger is definitely recommended!

What else did we learn:
The price quotes on comparison portals are only cheaper at first glance!

Comment from Ing. Steininger Gebäude- & Energietechnik e.U.:
Dear customer!
Thank you for your review - we are sorry that your execution was delayed!
We have changed some procedures since the beginning of the year (which are now starting to run) and also hired new very good employees so that there will be no more prolonged delays.
I hope we can welcome you back to the company as a customer in the future and give you 100% satisfaction.

From the preparation of the offer to the order processing, I can only report positive things.
I would especially like to mention the employees who installed the heating system, who were particularly friendly and courteous. The questions during the training were answered in detail by the technician and thus the use of the new device was made understandable.

38 Reviews from 2 other sources

All reviews and experiences about Ing. Steininger Gebäude- & Energietechnik e.U. are the subjective opinions of those who compose and submit them  |  The profile owner is responsible for the contents of this page  |   Profile active since 24/10/2016  |  Last update: 24/05/2022   |  Report profile