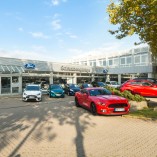 783 Reviews i
published (99 %)
out of 784 reviews
of which
559 Reviews
from 3 other sources
Authenticity of reviews
Submit a review
Contact information
Schwabengarage GmbH Pforzheim- Your new car, used car and service professional for the brands FORD and MAZDA

We look forward to your visit to the website of Schwabengarage GmbH Pforzheim. Because with us everything revolves around you: our... customers. Personal service has always been part of our philosophy. Just like reliable repairs as well as inexpensive spare parts and accessories, we naturally offer you all vehicle categories: from new cars to one-day registrations to used cars. We are your specialist for new, used, annual and demonstration cars, workshop service, bodywork and paint, parts and accessories, car financing, car leasing, fleet management and car insurance.

Here you can find out everything about Schwabengarage GmbH Pforzheim in Karlsruher Str. 22 in 75179 Pforzheim and the employees. You can find out about our opening hours and get detailed directions to us on request. If you would like to experience FORD and MAZDA live, just come and visit us. Our dedicated team will advise you competently and individually.

Schwabengarage GmbH is a company of the Emil Frey Group Germany. In terms of sales channels, financial services and regional coverage, the Emil Frey Group Germany has a unique position in Germany. It offers its customers a unique variety of brands - for example the automobile brands FORD, HYUNDAI, JAGUAR, LAND ROVER, MAZDA, OPEL, SUBARU and VOLVO at the Schwabengarage GmbH locations.

In addition, Emil Frey Group Germany is the exclusive importer of Subaru and Mitsubishi vehicles. Wholesale of parts and accessories as well as comprehensive logistics and financial services in the automotive sector round off the portfolio of the group of companies.

Emil Frey Group Germany is part of the Emil Frey Group, headquartered in Zurich. The four essential factors for the success of the group of companies were defined by company founder Emil Frey as early as 1935 in a customer letter "To my dear customers!". In it, a good price-performance ratio, the offer of first-class products, excellent craftsmanship, and personal support are considered core values.

The corporate philosophy is based on absolute customer orientation and maximum customer satisfaction and is still the guiding principle for all Emil Frey Group companies today.

Top competencies (Based on 224 published reviews)

Comment from Schwabengarage GmbH Pforzheim:
Good morning, we are very sorry about this. We would like to talk to you about this incident. Unfortunately, due to the anonymous rating, it is not possible to locate you in our customer base. Is there a possibility that you contact me by mail melisa.yoldas@schwabengarage.de or by phone: 07231379514?
I look forward to your feedback.

559 Reviews from 3 other sources

Your message to Schwabengarage GmbH Pforzheim

* All reviews and experiences about Schwabengarage GmbH Pforzheim are the subjective opinions of those who compose and submit them  |  The profile owner is responsible for the contents of this page  |   Profile active since 12/27/2017  |  Last update: 03/07/2022   |  Report profile