Parkett Interfloor GmbH
Write a message
Excellent
Get in touch 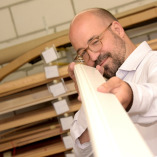 4.86 out of 5
Excellent
209 Reviews
of which
181 Reviews
from 4 other sources
Authenticity of reviews
Submit a review
Share profile
Contact information
Your expert for parquet and flooring work in Düsseldorf

If you have a project involving parquet work and/or flooring work and your construction site is in Düsseldorf and the surrounding area, there is no way around contacting Parkett Interfloor.
... Parkett Interfloor is an owner-managed medium-sized company with a clear focus on the trades parquet and flooring work.

Our team consists of long-time employees, all of whom ensure on a daily basis that old floors are renovated or new buildings are equipped with new floors. The highest priority is given to the quality of the work. Parquet Interfloor relies exclusively on the use of healthy materials and sustainable floor coverings.
The parquet we use comes exclusively from controlled sources. Certificates such as FSC ensure ecologically appropriate, socially beneficial and economically profitable management of the forests from which our parquet comes. By purchasing parquet from us, you ensure that the needs of the present generation are met without compromising the needs of future generations.
Our work is also sustainable because it lasts a long time! Parquet Interfloor Ltd. belongs to the prequalified construction companies. Our company was registered in the list of prequalified construction companies by the Association for the Prequalification of Construction Companies. The prequalification for Parkett Interfloor GmbH is valid for the following service areas: Flooring work and parquet work.
With these two trades you can be extremely sure that we work according to the latest state of the art and thus execute a safe construction for you, which not only lasts long, but also looks beautiful.

All our employees are trained, or have many years of experience, parquet layers and floor layers. Our ambition is always a perfect performance and solving problems especially in case of renovation needs.

We accompany your building project from the consultation and planning to different floor coverings and the underground, as well as the necessary preparations, up to the care after the installation.

Our customers benefit from over 40 years of experience and company history.

From our history:
In 1972, the opportunity arose to gain a foothold in the flooring sector. By intensively attending trainings and courses, Heinz-Werner Bock was able to obtain a qualified degree as a certified floor layer with top grades. As a result, he was appointed to the examination board for the next few years and was elected as a specialist group leader in the Parquet and Flooring Technology Guild for a number of years. With his extensive expertise, he made a good name for himself. After only a few years, he took on major contracts. He was not afraid to carry out several orders in Algeria. In 1980, the company's legal form was changed to a limited liability company. Since 1990, Heinz-Werner Bock has also been a trainer in the parquet and flooring sector. After 25 years of activities in the Mülheimer Straße, the company headquarters, the exhibition and the workshop were moved in 2012 to the Gewerbehof Vogelsanger Weg 39, 40470 Düsseldorf, in direct proximity to the TÜV.
In 2017, the successful age succession by Jan Loosen, trained carpenter and studied civil engineering. He quickly familiarized himself with the cosmos of parquet and flooring. His additional qualification as a specialist construction manager for flooring technology at the Bauhaus University in Weimar bears witness to his immense specialist knowledge. Currently, he is continuing his education as a master parquet layer at the Chamber of Crafts in Cologne.
In 2018, he also took over in succession to Bodenbeläge Lothar Gorze from Höher Weg in Düsseldorf. Since that time, Jan Loosen has been supported by his operations manager Tomasz Wojcik. Tomasz Wojcik is a floor layer who has been trained from scratch and completed his apprenticeship in the company of Lothar Gorze. He earned his journeyman's certificate as the best in his class. He is also currently training to become a master parquet layer.
In October 2021, the company was renamed from Bock-Interfloor GmbH to Parkett Interfloor GmbH. (Raider now becomes Twix, otherwise nothing changes!) and the company headquarters was moved to our home in Düsseldorf-Flingern. You will now find us in the Gewerbezentrum DüsselBogen at Hoffeldstraße 104, 40235 Düsseldorf. We are looking forward to your visit (please make an appointment).
Conclusion: thanks to our wealth of experience, you can not only save a lot of time and money, but also spare your nerves. Because nothing is more annoying than a non-functioning floor.
Come to the expert for parquet and flooring work in Düsseldorf right away!
View full description

4.67 out of 5
6 Reviews
Customers are overall happy with the results.

4.73 out of 5
Excellent
5.00 out of 5
Excellent
Recommendation
We have had a good experience with Parkett Interfloor, everyone is nice and competent,
Mr. Loosen takes time for his customers, even comes to Cologne on weekends to clarify open questions about the products.
We are very satisfied with the work and the service. Thank you very much.
Highly recommended.

4.86 out of 5
Excellent
Recommendation
Friendly, comprehensive and customer-oriented advice, as well as answers to the vast majority of questions due to extensive professional experience. Friendly delivery according to customer requirements and good explanations to product-related questions. Satisfied all around. Prices appropriate to the product. Gladly again.
(Addition: A German company name I fänd top, but you can not have everything).
Show original Translation
Quality 4.88
Value 4.75
Services 5.00
Implementation 4.67
Consulting 5.00
Customer service
Excellent (4.90)
Cost-performance ratio
Good (4.00)
Customer review & rating for:
Parkett Interfloor GmbH
View rating
11/02/2022Holger B.
Send email to reviewer  |  Report review

4.40 out of 5
Good
Recommendation
We are very satisfied with the friendly and competent advice from Mrs. Naczynski and have decided on a parquet from Bauwerk because of the good appointments and product selection. We look forward to the delivery !
Show original Translation
Quality 5.00
Value 4.00
Services 4.00
Implementation 4.00
Consulting 5.00
Customer service
Good (4.00)
Cost-performance ratio
Good (4.00)
Customer review & rating for:
Parkett Interfloor GmbH
View rating
27/04/2021C.
Report review

4.88 out of 5
Excellent
Recommendation
Friendliness and expertise were the first impression and it ended with a prima laid floor.
Various scheduling conflicts with other craftsmen were cleared up among themselves with consultation with us as customers and clients.
Possible problems were pointed out immediately and solutions were offered.
We were very satisfied with the large selection in the shop and the support in the selection of the product.


Share review
5.00 out of 5
Excellent
Recommendation
For my new project, I repeatedly came to Bock Interfloor because the company really delivers excellent work. The complaint management and a friendly solution-oriented approach are also positive. The boss himself is very concerned about customer satisfaction, so working with this company simply leaves an all-round good feeling. My special thanks go to Mr. S. Lutzev for his commitment and professionalism. We will see each other again!
Show original Translation
Quality 5.00
Value 5.00
Services 5.00
Implementation 5.00
Consulting 5.00
Customer service
Good (4.00)
Cost-performance ratio
Good (4.00)
Customer review & rating for:
Parkett Interfloor GmbH
View rating
08/09/2019Dr.med. E. A.
Send email to reviewer  |  Report review


Share review
3.55 out of 5
Good
In the offer it was not possible to see which slats were ordered, because there was only a technical name. During installation it was noticed that the wrong slats were ordered.
During the consultation, we had directly decided on slats with a silver coating, whereupon we were also shown samples that had none. When we brought this up during installation, Mr. Swertz became very loud and claimed that we had chosen them.

He then simply left again without at least having installed the rails.
In an email, he then told us that the new slats had been ordered from the manufacturer without first obtaining confirmation from us.


Share review
4.63 out of 5
Excellent
Recommendation
There was an appointment on site to clarify if the floor needs to be cleaned/oiled. It was promised to send an offer for a cleaning kit / care set. We are still waiting for that.
Show original Translation
Quality 4.38
Value 4.13
Services 5.00
Implementation 5.00
Consulting 4.63
Customer service
Excellent (4.60)
Cost-performance ratio
Good (4.00)
Customer review & rating for:
Parkett Interfloor GmbH
View rating
19/04/2019Ulrich Neunfinger, H.
Send email to reviewer  |  Report review


Share review
5.00 out of 5
Excellent
Recommendation
The showroom and the product selection of high-quality parquet, as well as a very competent advice has moved me to buy parquet there and to take advantage of the full service including floor layer. The floor is top, and the floorers have done a masterful job ! The boss personally checked at the end of the acceptance of the work personally . I thought that was great! There is taken care of ! Customer is king at Bock Interfloor !
Show original Translation
Quality 5.00
Value 5.00
Services 5.00
Implementation 5.00
Consulting 5.00
Customer service
Excellent (5.00)
Cost-performance ratio
Excellent (5.00)
Customer review & rating for:
Parkett Interfloor GmbH
View rating
27/02/2019Andreas W.
Send email to reviewer  |  Report review

181 Reviews from 4 other sources

Your message to Parkett Interfloor GmbH

All reviews and experiences about Parkett Interfloor GmbH are the subjective opinions of those who compose and submit them  |  The profile owner is responsible for the contents of this page  |   Profile active since 27/02/2019  |  Last update: 06/01/2023   |  Report profile