Bauknecht Hausgeräte GmbH
Write a message
Get in touch 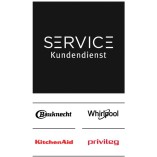 Top competencies (Based on 3,116 published reviews)

2.56 out of 5
9 Reviews
Bauknecht Hausgeräte GmbH assesses all customer requirements and clarifies any contradictions.

2.45 out of 5
11 Reviews
Bauknecht Hausgeräte GmbH understands the customer's concerns and expectations.

1.00 out of 5
Poor
Since the lid of my WMT Pro 55 U washing machine had rusted after only two years, I wanted to have the lid replaced. I had declined a warranty insurance for the period after the warranty, where repair costs are covered, during the telephone conversation with the customer service. I made an appointment. I was told that my credit card number was required. Then I was immediately, without this was said, 229 euros debited, although the appointment is only 6 weeks later. The promised written order confirmation by mail, however, did not come Unseriöser it does not go. I immediately canceled the order and demanded the money back. I have never experienced such customer service.
Show original Translation
Quality 1.00
Consulting 1.00
Customer service
Poor (1.00)
Cost-performance ratio
Poor (1.00)
Customer review & rating for:
Bauknecht Hausgeräte GmbH
View rating
12/01/2022Peter Hilbert
Send email to reviewer  |  Report review
Share review:
1.00 out of 5
Poor
1. washing machine defective, problem described, first technician appointment in 3 weeks (!?).
2. technician finds identically described problem on site, new appointment in 3 weeks.
3. incomprehensible cancellation of the repair appointment by automatic announcement on the phone.
New appointment in 2 weeks.
4. ???
Total duration so far approx. 6 weeks, end not foreseeable.
=> unreasonable

Comment from Bauknecht Hausgeräte GmbH:
Dear Mr. Rähtsel,
We are extremely sorry that you are not satisfied with your fully automatic washing machine from our company. We apologize for any inconvenience caused.
Of course, it is not in the interest of customer satisfaction if the repair of an urgently needed household appliance cannot be carried out promptly. The spare part required for the repair is on back order.
We have asked our planning department to check whether your order can be brought forward as soon as the technician confirms receipt of the spare parts. If this is possible, you will be informed by us at short notice. Otherwise, your appointment will remain as agreed.
We assume that the repair will be carried out successfully and that you will have no further cause for complaint in the future.
With kind regards
Your Bauknecht Team

The customer service of Bauknecht, whereby service is the wrong word here, can be described as absolutely poor.

Even the first phone call with the customer center was not satisfactory. The employee was friendly, but spoke insufficient German and therefore did not understand the description of the problem regarding the defective washing machine correctly. Thus, even the repair order was not recorded correctly. Earliest possible appointment for the visit of a technician in 2 1/2 weeks. One day before this appointment, it was canceled and postponed for another 2 1/2 weeks. Apart from the day off, this means 5 weeks without a washing machine! A new phone call regarding a more timely appointment for the technician brought no success.

As a result, we heard nothing for weeks. After repeated inquiries to the hotline, we were only ever told that the responsible department had not yet released the order.
A call to the assigned technician then brought the following realization: Bauknecht is of the opinion that the appliance can be repaired (even if half the oven has to be replaced for this). The parts had been ordered.

After 5 weeks, we asked again via WhatsApp chat and were told that the parts were ordered and would be delivered soon.
Another week later, the parts were then there and we received a repair appointment for yet another week later. (8 weeks after reporting the damage!)
On the morning of the repair appointment we now received a call from the repair service provider: The technician had checked the spare part and it was defective. Unfortunately, they would have to cancel the appointment.

So far, no one has apologized to us for the inconvenience. In addition, we have not had a working oven for eight weeks. Thank you for nothing.

Would we recommend Bauknecht to anyone? Absolutely NOT - unless you like catastrophic service....

Comment from Bauknecht Hausgeräte GmbH:
Dear Bauknecht customer,
we understand your displeasure and are extremely sorry that you had the described experience with the scheduling.
Of course, it is not in the customer's interest, nor in our corporate philosophy, if a repair on an urgently needed appliance cannot be carried out promptly and satisfactorily.
We sincerely apologize for the inconvenience caused to you.

Unfortunately, we are unable to obtain any contact information or order number from your review, nor are we able to send you a personal message. If you provide us with your contact details or order number, we will be happy to look into the matter for you as soon as possible.
We thank you again for your patience and hope to be able to satisfy you again.

Your message to Bauknecht Hausgeräte GmbH

* All reviews and experiences about Bauknecht Hausgeräte GmbH are the subjective opinions of those who compose and submit them  |  The profile owner is responsible for the contents of this page  |   Profile active since 07/10/2017  |  Last update: 12/01/2022   |  Report profile

However, should you feel that a review is in violation of our guidelines, you can submit a request to have the review assessed by the ProvenExpert quality assurance team by using the following contact form.
Continue Submit report Submit report Close
Send email to reviewer
* Required fields
Send email Close
Legal notice
Close
Get in touch
Review Guidelines  |  Quality Assurance  |  Privacy Policy  |  Legal Notice  © 2011 - 2022 Expert Systems GmbH
© 2011 - 2022 Expert Systems AG
Note
Close