Everything from a single source-in Ulm and the surrounding area 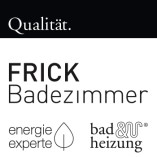 4.84 out of 5
Excellent
52 Reviews
of which
12 Reviews
from 2 other sources
Authenticity of reviews
Submit a review
Contact information
We plan and design your home together with you and make it your favorite place. We offer all interior design services as a complete solution. We take your personal wishes and needs into account. Your renovation project will be planned and realized... in proven cooperation with our competent craftsmen partners. This means for you, only one contact person and the certainty that all involved companies have the same quality standards. We plan, manage and coordinate the renovation work on schedule and reliably.
View full description

5.00 out of 5
18 Reviews
Customers would use the services of Frick bad & heizung Ulm GmbH again.

4.94 out of 5
17 Reviews
Customers of Frick bad & heizung Ulm GmbH are overall happy with the results.

4.91 out of 5
Excellent
4.80 out of 5
Excellent
Recommendation
In the context of a renovation of our guest toilet, I discovered the company Frick. Already at the first visit I liked the selection of materials, the very beautiful and tasteful sample bathrooms, fittings, tiles up to the towels extraordinarily well.

The very competent advice and compilation of the individual products by Mrs. Frick has made this small room a very fancy and appealing "business card" of our house in high quality.
Last but not least, I would like to emphasize that the craftsmanship and performance was carried out very competently and without any defects. The always friendly, understanding and professional way of working of Mrs. Frick completes the positive assessment of this company.
Bathrooms only with Frick!


Show original Translation
Quality 5.00
Service on offer 4.00
Services 5.00
Consulting 5.00
Friendliness 5.00
Customer service
Excellent (5.00)
Cost-performance ratio
Good (4.00)
Customer review & rating for:
Frick bad & heizung Ulm GmbH
View rating
03/22/2022Anonymously
Send email to reviewer  |  Report review
Share review:
5.00 out of 5
Excellent
Recommendation
The order included the renovation of a shower enclosure.
After completion, we enjoy a super result, thanks to very competent advice.
With patience and overview, all wishes were always taken into account.
Mr. Giebfried has worked out diverse and gr0ßartige great proposals from reputable manufacturers with absolutely high-quality materials.
There was very good communication and quick answers to all queries.
The execution by the craftsman was perfectly implemented with pronounced expertise and skill. Absolutely recommendable!

12 Reviews from 2 other sources

All reviews and experiences about Frick bad & heizung Ulm GmbH are the subjective opinions of those who compose and submit them  |  The profile owner is responsible for the contents of this page  |   Profile active since 09/14/2018  |  Last update: 06/07/2022   |  Report profile