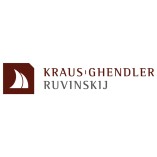 Top competencies (Based on 196 published reviews)

The law firm won the case against the health insurance company for my parents. And that actually 2 times. We were very satisfied from the first contact to the result. Although you have to call every now and then to get information in between, it was very worthwhile for us.
Absolute recommendation!

* All reviews and experiences about KRAUS GHENDLER RUVINSKIJ Anwaltskanzlei are the subjective opinions of those who compose and submit them  |  The profile owner is responsible for the contents of this page  |   Profile active since 05/18/2016  |  Last update: 08/10/2022   |  Report profile