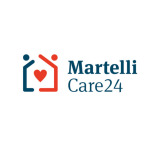 4.82 out of 5
Excellent
158 Reviews
of which
104 Reviews
from 3 other sources
Submit a review
Contact information
Martelli-Care24 has made it its business to find the perfect 24-hour care for people in need of help and care in their own homes. In doing so, we place particular emphasis on responding to the wishes and needs of our customers individually.

We... place the highest demands on the experience and references of our caregivers. Good German-speaking care personnel is a prerequisite for us.

We also keep a close eye on their qualifications and human skills, thus providing the prerequisites for the greatest possible security. In our daily work with customers and caregivers, we focus on reliability, responsibility and absolute trust.

Our goal is to enable people in need of care to live largely self-determined lives in their own homes.
View full description

4.97 out of 5
34 Reviews
Martelli Care24 understands the customer's concerns and expectations.

4.94 out of 5
34 Reviews
Martelli Care24 comprehensively analyzes the starting situation and possible actions.

4.88 out of 5
Excellent
5.00 out of 5
Excellent
Recommendation
This nursing service is highly recommended. Very nice nursing staff as well as the housekeeping team. Also very helpful in all matters. In the office you are advised very quickly and also there is from my experience her helpfulness in 1.stelle!
So I can only recommend the care service
Show original Translation
Quality 5.00
Value 5.00
Services 5.00
Realization 5.00
Consulting 5.00
Customer service
Excellent (5.00)
Cost-performance ratio
Excellent (5.00)
Customer review & rating for:
Martelli Care24 Service und Dienstleistungsagentur
View rating
05/23/2022Lara F.
Send email to reviewer  |  Report review
Share review:
5.00 out of 5
Excellent
Recommendation
Sensational, highly recommended
1A trained staff , very prudent always a sympathetic ear
Friendly and reliable

We have always been well taken care of and advised. Our current caregiver is a piece of gold.

Thank you very much!

After an intensive search for 24h care for my father, we came across the agency through a recommendation. We decided -despite higher costs- for them because they talked about qualified ladies who have to go through a 3-step interview and are put through their paces. This also convinced us in the end, because we only wanted the best for our father and we wanted him to be safe and in the best hands.

Martelli Care was able to organize a caregiver from Romania for us at very short notice, who then could not arrive due to a Corona case. A new lady was quickly found who could arrive immediately, but did not have a driver's license - which was necessary - and was therefore only to be used for one week.

Then began a very upsetting time. The lady came and acted as if she knew nothing. She had not received a briefing and supposedly did not know that she was to stay for only one week. She constantly let us as customers feel her displeasure with the agency. The displeasure was accompanied by an unwillingness to complete the tasks she was assigned. In addition, she said she had last been tested for Corona a month ago and had not tested herself before. Whether this was true, we do not know.

What was stressful during those few days was that the lady who was assigned could not clearly separate her displeasure with Martelli Care from her work here and dragged my father and us into it, which was not easy for my sick father. The caregiver was replaced after a few days by another lady after she threatened to go to the police if she did not receive her money. Again, this is not an issue that belongs in this work relationship. She left behind a bitterly nasty letter that reflected her mean character. She would not have been given anything to eat and would only have had to work. In addition, she has put Martelli Care in a very bad light.

This letter was then found by the following lady, who thus - as a brand new employee from the agency - did not have a happy start. The new lady seemed very nice and friendly. We were all happy that now everything would be fine and peace would return. She was advertised to us as a lady with a driver's license, but it was not local, it was in Romania. After a week, the lady received a letter so that the business could be registered. This is where the second nerve terror began. The lady was reluctant to sign it and thus made my father very worried with her upset behavior. When I asked Martelli Care, they told me that they would take care of it. Then came the info that you had found a new lady who could start immediately. We asked the agency if the caregiver was aware that she would have to leave. This was answered in the affirmative. My father then gently broached the subject to the lady, whereupon she completely freaked out and started yelling around. She made good on her threat to call the police. My father then had to deal with three policemen and a hysterical lady. I should mention here that my father has Parkinson's disease and can't stand stressful situations very well. In the stressful situation, my father fell and hurt his head, so that a doctor had to come.

Martelli Care could not send one of their employees to see my father, so we were on our own. That alone is completely unacceptable. Fortunately, the agency was finally able to talk to her and calm her down a bit, although the lady's exit was then very hysterical again. It was all a very disturbing situation that my father was exposed to here.

Then came lady #3, where everything looked very promising. This lady has now stayed for 2 months. This lady also did not want to sign the contract with the agency at first and after coaxing it worked out. In the end, we were only semi-satisfied with this lady. She took pictures of my father sleeping and showed us the pictures so that we could see how tired he always was. Such behavior alone is already very disrespectful. She was also always smoking a lot, chatting with the neighbor and has let the work drag very much over time.

I summarize up to here: 3 ladies in 3 months, many nervous stressful arguments with the ladies, a police operation at home, an accident caused by the police operation, many worries and also tears. The worst was still the human disappointment, because we have received all the ladies warmly and with open arms. All three turned out to be vicious and not honest women, which is absolutely out of place in this profession.

The purpose & goal of the assignment was to get peace & relaxation into the lives of my father and us. We completely missed the target. The relationship of trust with the agency was then so disturbed that we quit. What you can certainly credit the agency for is that they wanted to present us with a solution quickly at the beginning, which we also appreciate. Only the choice of the ladies was not once very happy. But 3 times such bad luck?! The communication with the manager - even on weekends - was good. But our contact person was not as friendly as in the beginning. As if we were responsible for this disaster.

Therefore, unfortunately, I cannot give Martelli Care a good rating and hope that we are only the exception and that all three ladies are no longer working in this field. We are now with another agency and much more satisfied.

first of all, thank you very much for your feedback. We have sat down with the team to reconstruct the overall situation. Admittedly, we are very surprised about your view of the incidents and your evaluation.

You contacted Ms. Martelli at the initial intake (09/13-21) after receiving our contact via a referral. On 09/15/21, care began through our agency. We received your request on 09/13/21, so we had a time capacity of two days to provide care as quickly as possible. The first caregiver sheet you received (14.09.21) was also the caregiver who arrived at your place already on 15.09.21. On 16.09.21 you contacted us already in the morning (7.20 a.m.) that your sister could not build up a relationship to the caregiver and therefore an interpersonal communication, as well as a cooperation on your part would not be possible. Your father, on the other hand, did not feel the need to let the caregiver leave, as he felt very well protected with her. According to the contract, travel and departure costs should have been paid directly by the customer, here the agency has borne all travel costs for the first time.

On 16.09.21 you received the new caregiver sheet. You had the lady arrive at your location on 09/20/21. The copy of the Covid test was sent to you electronically - as requested by you. Again, you contacted us that there was interpersonal conflict on your part. In order to calm the situation, we were in contact with you at all times, both in the evenings after official opening hours, in the mornings before opening hours, as well as on weekends - the entire team was on duty for you. When asked how your father felt, you communicated to us that your father felt very comfortable and would like to continue working with the current caregiver so He could get some rest. In addition, no travel expenses were covered by you, these were again borne by our agency.

On 03.10.21, another caregiver arrived. With this lady you had also previously spoken on the phone. Your father also got along wonderfully with this lady. Again, you contacted us daily that the lady would work 'too independently' and would not listen to the directions of you or your sister. Your father had asked you and your sister to stay out of the situation as he trusted the lady and was also very happy with the care. Immediately after the discussion with your father, you contacted the lady to have her work for you privately, without our agency. To point out once: if one would like to avoid the German tax office and a care cash spend, without any contracts, one calls this '"moonlighting". We as an agency would like to clearly distance ourselves from such an approach. This caregiver remained despite all this until 03.12.21 with your father. Again, no travel expenses were borne by you.

104 Reviews from 3 other sources

Your message to Martelli Care24

All reviews and experiences about Martelli Care24 are the subjective opinions of those who compose and submit them  |  The profile owner is responsible for the contents of this page  |   Profile active since 10/14/2020  |  Last update: 05/23/2022   |  Report profile