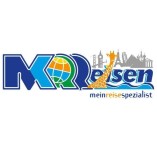 583 Reviews i
published (98%)
out of 592 reviews
of which
76 Reviews
from 3 other sources
Authenticity of reviews
Submit a review
Contact information
We at MKR Reisen are your online and offline travel agency and we too have decided on a future-proof website. With this we want to meet our customers and their wishes, who want to quickly look for the latest events with their smartphone or tablet.... At the same time, we offer all those who have a little more time online the opportunity to inquire in the best way about the next trip or the next vacation home. With the ravages of time, we are also gearing our offering to the digital world.

This means that you can obtain important information and the latest travel news from us online. Currently already over Facebook under www.facebook.com/MKRReisen, on our new Internet side www.mkr-reisen.de and soon also over Google+. As you can see, we are keeping up with the digital change. We will constantly expand our offer.

Of course, we are as usual in the travel agency for you. You can find us Monday to Friday from 09:30 - 18:30 and Saturday from 09:30 to 15:00 in Ludwigstraße 67 - 69 in Ludwigshafen, where we personally design your new trip face to face with you. Visit us online! Enjoy a visit on our beautiful website and feel already now the next trip! We are looking forward to meeting you!

Top competencies (Based on 507 published reviews)

4.96 out of 5
25 Reviews
MKR Reisen - meinreisespezialist offers a professional service.

5.00 out of 5
23 Reviews
Customers would use the services of MKR Reisen - meinreisespezialist again.

Comment from MKR Reisen - meinreisespezialist:
Dear Mrs. Simon,
thank you very much for your positive feedback! We are very pleased to be able to support you again on your next vacation.
Kind regards Your team from MKR Reisen

Comment from MKR Reisen - meinreisespezialist:
Dear Mrs. Kosior,
thank you very much, we appreciate it! We look forward to welcoming you back to the travel agency soon.
Kind regards from Ludwigshafen

Report review
Share review:
4.67 out of 5
Excellent
Recommendation
We are already very satisfied with our consultation.
Wishes and ideas were taken into account and above all listened to what we value and what is very important to us.
We were told active suggestions and on what we need to consider.
We were advised about health insurance, travel insurance and got a top advice so that we did not have to make ourselves smart again.

Comment from MKR Reisen - meinreisespezialist:
Dear Ms. Handan,
we are very pleased to hear that! We are already looking forward to your next visit.
Kind regards from Ludwigshafen

MKR Reisen has already conquered our trust a few years ago.

I can recommend with a clear conscience.

Comment from MKR Reisen - meinreisespezialist:
Thank you very much for your positive feedback! We are very much looking forward to your next visit with us to plan the next trip.
Send email to reviewer  |  Report review
Share review:
5.00 out of 5
Excellent
Recommendation
We were very satisfied with the advice and assistance provided by Ms. Klee.
Show original Translation
Quality 5.00
Services 5.00
Consulting 5.00
Customer service
Excellent (5.00)
Customer review & rating for:
Reiseberatung und Buchung durch MKR Reisen-meinreisespezialist
View rating
06/02/2022Klaus Johann B.

Comment from MKR Reisen - meinreisespezialist:
Thank you so much for your positive feedback! I hope you had a wonderful trip and I look forward to assisting you on your next trip.
Send email to reviewer  |  Report review
Share review:
5.00 out of 5
Excellent
Recommendation
I did not book a trip but a transfer to Frankfurt airport at very short notice and was very surprised by the prompt advice and help.Every contact with the staff (email,phone and in person) was very nice and courteous.For my next trip I will certainly also use their travel advice.
Show original Translation
Quality 5.00
Services 5.00
Consulting 5.00
Customer service
Excellent (5.00)
Customer review & rating for:
Reiseberatung und Buchung durch MKR Reisen-meinreisespezialist
View rating
05/13/2022Sandra S.

With the new consulting fee I was first surprised and see this also as sinvoll since there are quite a few who take advantage of good advice but then do not book, but I would have felt it good if mann had the money offset when booking.
Show original Translation
Quality 5.00
Value 5.00
Services 5.00
Performance 5.00
Consulting 5.00
Customer service
Excellent (5.00)
Cost-performance ratio
Excellent (5.00)
Customer review & rating for:
MKR Reisen - meinreisespezialist
View rating
07/22/2021Torsten J.

What I do not like is the consultation fee. If such a fee is charged, it should also be able to be credited to a booked trip.
Show original Translation
Quality 5.00
Value 4.00
Services 3.00
Performance 5.00
Consulting 5.00
Customer service
Excellent (5.00)
Cost-performance ratio
Average (3.00)
Customer review & rating for:
MKR Reisen - meinreisespezialist
View rating
07/21/2021Christian Rene M.

Comment from MKR Reisen - meinreisespezialist:
Hello Mr. Michler,
Thank you for taking the time to write your review. We understand the comment about the consulting fee. This is certainly conceivable after the Corona pandemic. Currently, almost all organizers are significantly reducing the commission. This unfortunately leads to this measure, if we want to continue to advise our customers in the usual style. Kind regards Thomas Gerung
Send email to reviewer  |  Report review
Share review:
5.00 out of 5
Excellent
Recommendation
We were super advised and are looking forward to the vacation.
Show original Translation
Quality 5.00
Value 5.00
Services 5.00
Performance 5.00
Consulting 5.00
Customer service
Excellent (5.00)
Cost-performance ratio
Excellent (5.00)
Customer review & rating for:
MKR Reisen - meinreisespezialist
View rating
07/21/2021Lusin M.
Send email to reviewer  |  Report review
Share review:
1 2 3 4 5

76 Reviews from 3 other sources

Your message to MKR Reisen - meinreisespezialist

* All reviews and experiences about MKR Reisen - meinreisespezialist are the subjective opinions of those who compose and submit them  |  The profile owner is responsible for the contents of this page  |   Profile active since 11/10/2017  |  Last update: 08/18/2022   |  Report profile