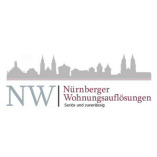 This award is based on the customer reviews of the last 12 months:
4.94 out of 5
Excellent
26 Reviews
Criteria for the award >
4.97 out of 5
Excellent
94 Reviews
of which
38 Reviews
from 1 other source
Authenticity of reviews
Submit a review
Contact information
NÜRNBERGER WOHNUNGSAUFLÖSUNGEN is a family business with many years of experience in the areas of:
Apartment liquidations
estate purchases
household liquidations... Antique purchases
Furthermore we take over company liquidations - from single offices to complete company buildings.
View full description

4.94 out of 5
Excellent
5.00 out of 5
Excellent
Recommendation
With the reliability of Mr. Achim Sprügel and his employees. The work was done quickly, cleanly and correctly. I will recommend the company to others.
Harald Böhm
Show original Translation
Quality 5.00
Value 5.00
Services 5.00
Realization 5.00
Consulting 5.00
Cost-performance ratio
Excellent (5.00)
Customer review & rating for:
NÜRNBERGER WOHNUNGSAUFLÖSUNGEN - artvendo AG
View rating
07/07/2022Harald B.
Send email to reviewer  |  Report review
Share review:
5.00 out of 5
Excellent
Recommendation
The liquidation of my late mother's apartment was excellently carried out by artvendo AG.
The advice and planning by Mr. Sprügel in advance was goal-oriented and absolutely expedient. In the execution all arrangements were kept. The employees of artvendo AG were very reliable, friendly and extremely diligent. All deadlines were met exactly, so that the resolution was completed on time.
My thanks again to artvendo AG for the great work and support in this difficult phase! I can recommend artvendo AG at any time!

38 Reviews from 1 other source

All reviews and experiences about NÜRNBERGER WOHNUNGSAUFLÖSUNGEN - artvendo AG are the subjective opinions of those who compose and submit them  |  The profile owner is responsible for the contents of this page  |   Profile active since 06/10/2020  |  Last update: 07/07/2022   |  Report profile