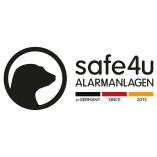 321 Reviews i
published (91%)
out of 353 reviews
of which
165 Reviews
from 2 other sources
Authenticity of reviews
Submit a review
Contact information
Experience our latest alarm system live at your home: The safe4u 365pro+Hybrid convinces with flexibility thanks to its modular design.

Prevention instead of loss
"Nothing will happen to me". Take action to protect your loved ones and your property - from the rude awakening....
Modular principle
365pro+Hybrid can be individually adapted to any property, from rental apartments to commercial premises.

Free security check
Before making a purchase decision, you can convince yourself of the function within your own four walls.

No wiring
The system does not require any complex wiring and is ready for immediate use.

Personal advice
You have a direct contact person who will provide you with personal support even after installation.

24/7 in connection
With our app plus the connection, you are always in touch with your system - even when you are not available.
View full description
Show less

Top competencies (Based on 156 published reviews)

5.00 out of 5
22 Reviews
Customers are overall happy with the results.

After about 1.5 years we can still say that we made the right decision.

Why we can say that:
We had an attempted burglary in late 2018, the system has kept what was advertised to us at the time. There was an attempt to pry open the front door of the house with a tool. Our alarm system went off and alerted me and my significant other, we were not home at the time but our dog was, we would hate to imagine what would have happened if we had not opted for this system and the burglar had gotten into our house....
That same evening, the police recorded the attempted burglary and a few days later, the burglary marks were processed by a handyman. Since it was an "attempted burglary", the cost of repairing the front door was covered by the insurance.
Another big plus point is that the consultant at the time is still there for us.
We feel safe and are happy to have chosen the system.

165 Reviews from 2 other sources

* All reviews and experiences about safe4u Alarmanlagen are the subjective opinions of those who compose and submit them  |  The profile owner is responsible for the contents of this page  |   Profile active since 03/23/2018  |  Last update: 02/23/2022   |  Report profile