VIA-FINANZ GMBH
Write a message
Excellent
Get in touch 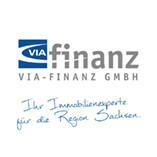 4.61 out of 5
Excellent
184 Reviews
of which
107 Reviews
from 3 other sources
Authenticity of reviews
Submit a review
Contact information
You want to sell your house, your property or your apartment in Chemnitz, the Ore Mountains, Central Saxony or in the Zwickau region or you are looking for a new home? Then VIA-FINANZ GmbH is the right partner for you! As real estate agents from... Chemnitz, we know the Saxon real estate market inside out and bring a lot of passion, experience and know-how.

As a seller, you benefit from a free property valuation by our real estate appraisers as well as from our targeted, exceptionally comprehensive marketing strategy, thanks to which we quickly find a solvent buyer - also for your property.

As a buyer, you can place a free real estate search order with us and find your dream property even faster. From the property search to the financing and insurance of your new home, we are your reliable partner.

You can find out more about our real estate marketing packages and services on our website: www.viafinanz.de.

4.96 out of 5
23 Reviews
VIA-FINANZ GMBH offers a professional service.

4.91 out of 5
23 Reviews
VIA-FINANZ GMBH is reliable in keeping to pre-arranged appointments.

He convinced us almost immediately to put the sale of the ETW in his hands. And we were not to be disappointed. At the end of May, we signed the purchase contract at the notary's office, and the sale has since been completed. And at a price we would never have dreamed of.

The formalities (brokerage contract, valuation, etc.) were quickly completed, so Mr. Krämer was able to act quickly on our behalf.

The ETW was presented - in addition to the company's own homepage - in all common Internet portals. And what can I say - besides the very detailed description - with photos, where I myself fell in love with the apartment again, I almost did not recognize our apartment. Just great... incl. virtual 360degree tour and floor plan. He's just got it, there's no other way to put it.

There was probably relatively much response from interested parties. Mr. Krämer handled the appointments with aplomb. Since I had previously organized viewings myself, I know how nerve-wracking such appointments can be. In contrast to the broker, I mostly concentrated on the negative things (I am not a salesman and you don't want to hide anything). In contrast, Mr. Krämer mainly advertised the positive aspects of the apartment.

Mr. Krämer informed us regularly about the current state of affairs and was always available for questions. The cooperation was very good, we always felt well taken care of and looked after.

The (3.57%) brokerage fee is just obligatory, in view of the quick sale and the sensational sales price all justified.

I admit that I was very skeptical of real estate agents in the beginning. But Mr. Krämer and the team of ViaFinanz GmbH managed to convince us very quickly of the opposite.
Should we ever have to/want to sell a property again in our lives, we would do it again with ViaFinanz GmbH at any time.

We are happy and can only recommend Mr. Krämer and ViaFinanz GmbH without reservation. Thank you very much!!!!

107 Reviews from 3 other sources

Your message to VIA-FINANZ GMBH

All reviews and experiences about VIA-FINANZ GMBH are the subjective opinions of those who compose and submit them  |  The profile owner is responsible for the contents of this page  |   Profile active since 08/25/2017  |  Last update: 12/08/2022   |  Report profile

However, should you feel that a review is in violation of our guidelines, you can submit a request to have the review assessed by the ProvenExpert quality assurance team by using the following contact form.
Continue Submit report Submit report Close
Send email to reviewer
* Required fields
Send email Close
Legal notice
Close
Get in touch
Review Guidelines  |  Quality Assurance  |  Privacy Policy  |  Legal Notice  © 2011 - 2022 Expert Systems GmbH
© 2011 - 2022 Expert Systems AG
Note
Close