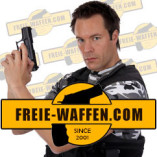 4.84 out of 5
Excellent
807 Reviews
of which
793 Reviews
from 3 other sources
Authenticity of reviews
Submit a review
Contact information
Welcome to the Free-Weapons.com Shop

Are you looking for a free weapon and would like to buy it online? - Then you are exactly right at Freie-Waffen.com. With us you can buy free weapons from 18 years comfortably online. Only a valid proof of age is necessary for the purchase.
... We are specialists in alarm guns and ammunition, air guns, self-defense and self-protection. We also offer a wide range of recreational sporting goods in the categories of crossbows, bows, knives, softair, home protection / Ram weapons and outdoor, camping and hiking.

Top brands and bargains await you in all areas. We look forward to your visit online or in the store and guarantee a safe, fast and reliable processing of your order and expert advice on your gun purchase.
View full description

The product was paid for the same day it was ordered but shipped out after a week of inquiry.
It arrived quickly after that. The product was supposed to be a sealed set but came unsealed and the magazine was missing. After several calls they finally sent the missing magazine without the package, meaning it was taken out of the set.
The way the workers conducted business felt unprofesional. There was no apology.
Even though we received our product in the end after 15 days, it is not worth going through all that effort.

793 Reviews from 3 other sources

Your message to ESC GmbH

All reviews and experiences about ESC GmbH are the subjective opinions of those who compose and submit them  |  The profile owner is responsible for the contents of this page  |   Profile active since 05/09/2017  |  Last update: 07/30/2022   |  Report profile