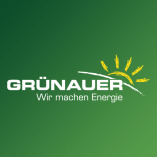 This award is based on the customer reviews of the last 12 months:
4.91 out of 5
Excellent
38 Reviews
Criteria for the award >

This award is based on the customer reviews of the last 12 months:
4.76 out of 5
Excellent
61 Reviews
of which
23 Reviews
from 2 other sources
Criteria for the award >
4.87 out of 5
Excellent
189 Reviews
of which
93 Reviews
from 2 other sources
Authenticity of reviews
Submit a review
Contact information
We, the team of Grünauer GmbH, would like to be your optimal partner for your independent electricity future.
For 20 years, we have focused exclusively on how to generate as much electricity as possible from free solar energy. At the same time, we... are a small medium-sized company with just over 30 employees. A master business from the heart of Lower Bavaria, close to you.
Because we are always there for you, from the first considerations and thoughts about the planning, the professional installation, commissioning to service and maintenance. Even the fiscal and financial aspects, as well as the consideration and application for state subsidies and aid - with us, this is all available from a single source thanks to the right partners.

4.94 out of 5
17 Reviews
Grünauer GmbH offers a professional service.

4.88 out of 5
16 Reviews
Customers are overall happy with the results.

It was important to me a company with which you can talk if something does not fit, both bosses always on hand.

Keep it up, a company with flair qualities, keep it up.

93 Reviews from 2 other sources

Your message to Grünauer GmbH

All reviews and experiences about Grünauer GmbH are the subjective opinions of those who compose and submit them  |  The profile owner is responsible for the contents of this page  |   Profile active since 01/17/2020  |  Last update: 07/07/2022   |  Report profile