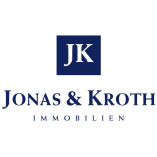 383 Reviews i
published (98%)
out of 389 reviews
of which
158 Reviews
from 1 other source
Authenticity of reviews
Submit a review
Contact information
You notice it from the first moment: At Jonas & Kroth GmbH, there is no off-the-shelf marketing. We are convinced that every property needs its own sales concept. To this end, we carefully work out the special features of your property and draw up... a strategy for marketing it in the best possible way.

We have made a name for ourselves as a successful real estate agent in the Miltenberg and Aschaffenburg districts. Our clients especially appreciate our personal commitment and expertise.

We fulfill what you expect:

- You expect professionalism.
- You want to achieve the maximum price.
- You demand power marketing for your property.
- You want a reliable negotiating partner.

Top competencies (Based on 225 published reviews)

5.00 out of 5
42 Reviews
Customers would use the services of Jonas & Kroth GmbH again.

4.91 out of 5
43 Reviews
Customers are overall happy with the agency service.

158 Reviews from 1 other source

Your message to Jonas & Kroth GmbH

* All reviews and experiences about Jonas & Kroth GmbH are the subjective opinions of those who compose and submit them  |  The profile owner is responsible for the contents of this page  |   Profile active since 01/17/2017  |  Last update: 09/23/2022   |  Report profile