We are a certification and standards consultancy. 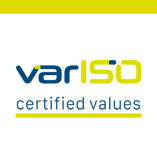 5.00 out of 5
13 Reviews
varISO GmbH offers a professional service.

5.00 out of 5
13 Reviews
Customers are overall happy with the results.

Such an open and honest approach to the highly relevant topics can only be recommended.

How did we come to varISO. I was contacted by a sales representative as part of his acquisition. Actually, I always end such phone calls quite quickly, but here it was somehow different. I very quickly had the feeling that they knew our problems and could show us possible solutions. I then asked for documents to be sent to me so that I could take a look at them at my leisure. Everything sounded quite serious. After about 2 weeks, I was contacted again by the sales department and asked for more information. The whole thing was done without the typical pressure of a sales representative. Actually unusual. So an appointment was made for a presentation. The employee explained in detail the procedure (in our case it was about data protection) and the services. The important point for me was that varISO not only advises with a sense of proportion, but they also actively support us by preparing the documents for us. Of course, that would be a real labor-saver for us. We then received an offer and it was all presented very transparently. So we decided to go with the company.

I have often experienced that there are certain differences between presentation and reality. But here they kept their word. The promised services were absolutely kept. We were not treated according to a standard scheme, we were dealt with individually and we also received suggestions and proposals again and again, which we had not considered before. Originally, we only wanted to have our documentation created. But after that worked so well, we also hired varISO as a data protection officer for us. I wish all service providers would work like this.

In conclusion, I can only say. Simply great team. Reliable and on time. Advice at eye level. Price performance fit for us. Clear recommendation. In the meantime, we are also thinking about implementing other topics such as QM and environmental protection with the service provider.

12 Reviews from 1 other source

Your message to varISO GmbH

All reviews and experiences about varISO GmbH are the subjective opinions of those who compose and submit them  |  The profile owner is responsible for the contents of this page  |   Profile active since 11/04/2020  |  Last update: 06/10/2022   |  Report profile