Elwin Ardelean
Write a message
Excellent
Get in touch 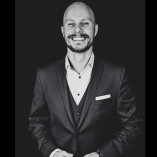 5.00 out of 5
3 Reviews
Elwin Ardelean offers a professional service.

5.00 out of 5
3 Reviews
Elwin Ardelean ensures that the time available is used effectively.

Elwin has his own way of meeting and seducing women!

When he explained to me in simple words how easy it is, it contradicted my reality that I knew about women until now, he also says himself he doesn't think about pick up and that's not what he teaches his customers.

He helps you find your own way and how to authentically express what you feel which in turn matches your personality.
It's not an easy way and it doesn't happen overnight.

The time with Elwin was a lot of fun for me.
And since the time of the individual appointments was about 2 months apart, I was able to gather my own experiences, which in turn raised many questions and he knew exactly where I was stuck and how he could help me.


Share review
5.00 out of 5
Excellent
Recommendation
I never thought I would take such a coaching course. At first I was very skeptical whether it could help me to improve my success with women.

But first to my person:
I am in my mid-twenties and a mechanical engineering student. The funny phrase "plaid shirt and sperm jam - I'm studying mechanical engineering" unfortunately has (had) a sad reality. In general, I was a bit later in the game when it came to women. I met my first girlfriend at the age of 21. The relationship lasted 1.5 years. After that it looked rather meager. Due to my study environment and my but rather of men through-drawn circle of friends, I met only a few women and had no idea how I could change that.

Coaching? - Okay, but with whom?
Many who are in the above situation have probably spent as much time as I have watching other men succeed with women on YouTube. One of those YouTubers was Erlwin, and I thought his style was cool right off the bat. He didn't seem to be following a scam, he was just being himself. At some point, I was so tired of being passive behind the screen that I scraped together some money and booked a 3-day coaching session with Elwin.

Day 1:
I was very nervous because I knew: now boundaries were going to be blown. What happened on that day was really blatant and still triggers heat waves in me. Elwin came to my area and we met in Cologne. He is a very easy-going guy and we got along really well right away. After loosely getting to know each other over a good cup of coffee, we got going.
Elwin is a man of action and does the things he asks me to do. Quite casually, he walked up to two girls and approached them. They were happy about the attention. Already I thought to myself, "Okay. They're not laughing at him at all." Shortly after, it was my turn. "Them! Let's go!" I knew I wasn't getting out of this one. I approached them and.... Bingo! She was delighted.
By the end of the day, I couldn't tell you how many women I had approached and realized, "I'm still alive. An incredible feeling!

Day 2:
Possibly this day was one of the most important of the coaching and for my personal development. The conversations with Elwin are personal and often very emotional. He is very empathetic and also lets me share his life, which made it even easier for me to open my heart. We talked a lot about things that may have prevented deeper relationships with women on an emotional level. The essence was really beautiful and can hardly be written down here.

Day 3:
The last day of coaching was already a bit more routine, which really sounds unbelievable when I consider that it would hardly have been possible for me to approach a woman before. Elwin again got everything out of me and brought me into the most embarrassing situations, which should be a lesson for me that NOTHING HAPPENS and you still LIVE at the end, but a large piece of experience is richer.

Conclusion:
I only recommend to everyone who thinks he is in a dead end to do this coaching with Elwin. It has moved mountains for me! Recommendation!
Show original Translation
Quality 5.00
Value 5.00
Services 5.00
Performance 5.00
Consulting 5.00
Customer service
Excellent (5.00)
Cost/Benefit
Excellent (5.00)
Customer review & rating for:
Elwin Ardelean
View rating
04/25/2019Anonymously
Send email to reviewer  |  Report review


Share review
5.00 out of 5
Excellent
Recommendation
Elwin is an excellent coach who really cares about your success as a student. He is very patient and knows exactly when you need a push and when you just need to struggle through something on your own. His perspective on the game is more that of a life style rather than an activity, the focus should be on being a happy, social guy who can be friendly with everyone in almost any situation. It's amazing how much this shift in perspective can improve your game. With his mentoring I've seen vast improvements in my confidence, changed the way I think about game, and feel far more able to go after my goals both in pickup and in life.


Share review
5.00 out of 5
Excellent
Recommendation
Even before the first meeting with Elwin, I was convinced that he would take me further. After the Cologne workshop, I came to the following conclusion: He has taken me further! We as a workshop group had developed a really positive group dynamic and had a great time together. Different characters. A unifying theme. Together we made an important step in the right direction. Wow!
Show original Translation
Quality 5.00
Value 5.00
Services 5.00
Performance 5.00
Consulting 5.00
Customer service
Excellent (5.00)
Cost/Benefit
Excellent (5.00)
Customer review & rating for:
Elwin Ardelean
View rating
08/28/2017S.
Send email to reviewer  |  Report review


Share review
5.00 out of 5
Excellent
Recommendation
Elwin is a very good coach. He can put himself in the shoes of his coaching participants very well and specifically addresses the problems. Through his manner he motivates to do the assigned exercises.
Show original Translation
Quality 5.00
Value 5.00
Services 5.00
Performance 5.00
Consulting 5.00
Customer service
Excellent (5.00)
Cost/Benefit
Excellent (5.00)
Customer review & rating for:
Elwin Ardelean
View rating
08/09/2017Anonymously
Send email to reviewer  |  Report review


Share review
4.75 out of 5
Excellent
Recommendation
I think it's great that Elwin firstly shows me how to approach In-Field correctly and secondly that he listens to me and my mindset, analyzes and guides me instead of just "imposing" methods on me. Thirdly, I simply feel in good hands with him, because he has an open ear for all problems and questions.
Show original Translation
Quality 4.75
Value 4.70
Services 4.80
Performance 4.70
Consulting 4.80
Customer service
Excellent (5.00)
Cost/Benefit
Excellent (5.00)
Customer review & rating for:
Elwin Ardelean
View rating
08/06/2017Anonymously
Send email to reviewer  |  Report review


Share review
5.00 out of 5
Excellent
Recommendation
He is very emphatic and puts himself in the shoes of his customers. He is not someone who, despite his experience, knowledge, and skills, comes across as "looking down on you", but like a friend who wants to do something good for you. My progress with him was remarkable after the first meeting.
Show original Translation
Quality 5.00
Value 5.00
Services 5.00
Performance 5.00
Consulting 5.00
Customer service
Excellent (5.00)
Cost/Benefit
Excellent (5.00)
Customer review & rating for:
Elwin Ardelean
View rating
07/31/2017Anonymously
Send email to reviewer  |  Report review


Share review
4.60 out of 5
Excellent
Recommendation
Elwin is a super positive and emphatic coach who pushed the troop, but always in a positive sense. He shows super in practice what you can improve and demonstrates his skills himself. Additionally, he addresses individual questions or needs when he notices someone is uncomfortable. Fully recommended!
Show original Translation
Quality 5.00
Value 5.00
Services 4.00
Performance 4.00
Consulting 5.00
Customer service
Excellent (5.00)
Cost/Benefit
Excellent (5.00)
Customer review & rating for:
Elwin Ardelean
View rating
07/27/2017B.
Report review


Share review
5.00 out of 5
Excellent
Recommendation
Elwin is a super coach and can only be recommended. His easy-going, relaxed and positive manner makes it fun to work with him. In every situation he is ready to demonstrate in practice what he is talking about.
Show original Translation
Quality 5.00
Value 5.00
Services 5.00
Performance 5.00
Consulting 5.00
Customer service
Excellent (5.00)
Cost/Benefit
Excellent (5.00)
Customer review & rating for:
Elwin Ardelean
View rating
03/26/2017Anonymously
Report review


Share review
4.40 out of 5
Good
Recommendation
I have Heer Ardelean my situation, in a few bullet points explained why I am unsure to meet new people! He could immediately put himself in the situation.
He said: go out in the evening without expectations! Every woman is interesting.
After the 2 meetings one it in
HD and one in KA I was thrilled.
Recommended for all those who so often say what a hot woman! But I would have no chance anyway.
Seven from Karlsruhe
Show original Translation
Quality 5.00
Value 4.00
Services 4.00
Performance 5.00
Consulting 4.00
Customer service
Excellent (5.00)
Cost/Benefit
Excellent (5.00)
Customer review & rating for:
Elwin Ardelean
View rating
03/21/2017Anonymously
Send email to reviewer  |  Report review


Share review
5.00 out of 5
Excellent
Recommendation
It was not a superficial consultation/coaching that I initially expected. Mr. Ardelean dealt with me individually and specifically addressed the passages where I was lacking. At no time did I have the feeling that I was being made to look like a fool. I have not regretted the decision.
Show original Translation
Quality 5.00
Value 5.00
Services 5.00
Performance 5.00
Consulting 5.00
Customer service
Excellent (5.00)
Cost/Benefit
Excellent (5.00)
Customer review & rating for:
Elwin Ardelean
View rating
03/10/2017M.
Send email to reviewer  |  Report review


Share review
1 2
Want to add more sources? Upgrade to at least the BASIC plan.
Submit a review
Get in touch
Share profile

Your message to Elwin Ardelean

All reviews and experiences about Elwin Ardelean are the subjective opinions of those who compose and submit them  |  The profile owner is responsible for the contents of this page  |   Profile active since 02/26/2017  |  Last update: 09/15/2019   |  Report profile

However, should you feel that a review is in violation of our guidelines, you can submit a request to have the review assessed by the ProvenExpert quality assurance team by using the following contact form.
Continue Submit report Submit report Close
Send email to reviewer
* Required fields
Send email Close
Rate now
Get in touch
Review Guidelines  |  Quality Assurance  |  Privacy Policy  |  Legal Notice  © 2011 - 2023 Expert Systems GmbH
© 2011 - 2023 Expert Systems AG
Note
Close