We are tackling the energy transition where it makes sense for each of us: at home. 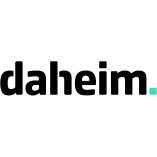 435 Reviews i
published (85%)
out of 510 reviews
of which
354 Reviews
from 2 other sources
Authenticity of reviews
Submit a review
Contact information
We enable private individuals to simply supply themselves with free and clean energy. And thus create a community you can rely on.
View full description

Top competencies (Based on 81 published reviews)

4.31 out of 5
16 Reviews
daheim Solar offers a professional service.

4.31 out of 5
16 Reviews
The services provided have brought long-term satisfaction.

4.00 out of 5
Good
has a poor customer service already waiting 4 weeks that my memory is made that does not load got 2 months ago the solar system created
Show original Translation
Quality 4.00
Value 4.00
Services 4.00
Realization 4.00
Consulting 4.00
Customer service
Poor (1.00)
Customer review & rating for:
daheim Solar
View rating
10/22/2021gerhard zimmermann

Comment from daheim Solar:
Dear Mr. Zimmermann,
We are very sorry that the waiting time for the manufacturer to rectify the fault has taken a comparatively long time. We are in constant communication with the manufacturer and are trying to obtain a timely appointment for you.
Thank you for your patience.
Your daheim Solar Team

I am very dissatisfied and can not recommend this company!

Comment from daheim Solar:
Hello, we are sorry that everything did not go as desired. We would like to review your case in more detail to find out what exactly went wrong in order to avoid such situations in the future. For this purpose, please send us an email with your full name to info@daheim-solar.de so that we can find a mutual solution.
Yours sincerely, Your daheim Solar Team
Report review
Share review:
1.00 out of 5
Poor
The execution of the installation of our PV system is an absolute disaster!
Show original Translation
Quality 1.00
Value 1.00
Services 1.00
Realization 1.00
Consulting 1.00
Customer service
Poor (1.00)
Customer review & rating for:
daheim Solar
View rating
07/24/2021Anonymously

354 Reviews from 2 other sources

Your message to daheim Solar

* All reviews and experiences about daheim Solar are the subjective opinions of those who compose and submit them  |  The profile owner is responsible for the contents of this page  |   Profile active since 09/02/2020  |  Last update: 03/16/2022   |  Report profile