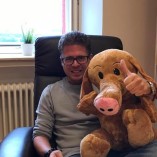 4.86 out of 5
Excellent
126 Reviews
of which
31 Reviews
from 1 other source
Authenticity of reviews
Submit a review
Contact information
For more than 10 years I have been engaged in hynosis therapy and have been working in my practice in the medical center in Krumbach for 5 years. Here I treat all disturbance patterns.
View full description

5.00 out of 5
7 Reviews
Hypnosepraxis Krumbach offers a professional service.

5.00 out of 5
7 Reviews
Hypnosepraxis Krumbach is competent and experienced.

31 Reviews from 1 other source

Your message to Hypnosepraxis Krumbach

All reviews and experiences about Hypnosepraxis Krumbach are the subjective opinions of those who compose and submit them  |  The profile owner is responsible for the contents of this page  |   Profile active since 04/06/2018  |  Last update: 08/03/2022   |  Report profile